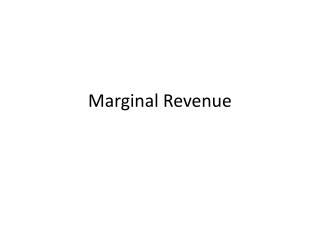 Marginal Revenue. Revenue is simply the amount of money a firm receives. If a firm is selling one product at a homogenous price (each unit sold is the same price) then total revenue will equal price times quantity( PxQ ).

Law of Diminishing Marginal returns - As units of one input are added (with all other inputs held constant), a point

Joint and marginal distribution functions - . for any two random variables x and y defined on the same sample space, the