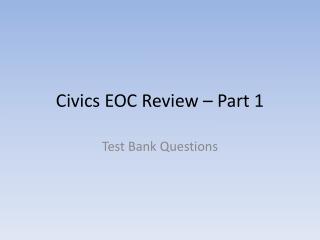 Civics - . why study civics?. find out how government works and what processes it uses to make decisions that affect us

Welcome to Civics! - . civics is the study of local, state, national, and international governments with a focus on your

Tulsi Shrivastava’s Computerized CIVICS notebook - . april 16, 2010. which of the following are duties of a district

Civics - Stinger #4. civics. classical republicanism has its roots in a. ancient greece. b . the roman republic. c . the

Government and Civics - . grade 7 mr. cole colea@nvnet.org. what we will learn in government and civics this year. the

The Twelve Days of Civics - . on the first day of civics my teacher gave to me, a textbook that’s only online . on the

Civics and Economics - . unit #1 notes. what is civics?. civics – the study of rights, duties and responsibilities of

GOVERNMENT &amp; CIVICS - . unit introduction. civics in our lives. why study civics?. civics the study of

We The People - . civics in our lives. civics is the study of what it means to be a citizen. citizen is a legal member of

Civics 11 Course Review - . “what won’t kill you, will only make you stronger.”. historical roots of canadian