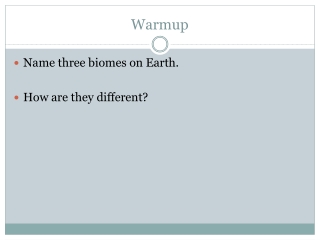 Warmup. Name three biomes on Earth. How are they different?. Honors Warmup. Draw a diagram of relative precipitation and temperature of the world’s biomes. Biodiversity. Warmup - . please complete a scatterplot for the data. you will be using this graph repeatedly today so use a full page

Warmup - . respond to the following statement with your opinion &amp; explanation (1/2 page min.) compare and