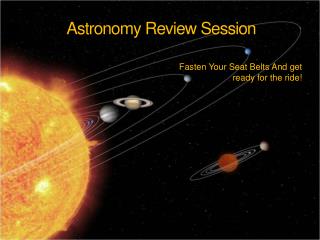 Astronomy Review Session. Fasten Your Seat Belts And get ready for the ride!. Axis of Rotation. Period of Rotation. an imaginary line that runs through the center of the earth. (The earth rotates around this line.). The time it takes for one rotation around the axis to occur. (one day). ASTRONOMY REVIEW SESSION - . galileo. proved the sun was the center of the solar system (heliocentric) used a telescope

Astronomy Review - . what is this phase of the moon?. a. third or last quarter moon b. waxing crescent moon c. first

Astronomy Review - . snc1d. star. a massive, luminous ball of gas held together by gravity (e.g., the sun). planet. a

Astronomy Review - . 1. describe the difference between apparent and absolute magnitude. include an explanation of

Astronomy Review - . the moon, tides, and gravitation. what is the mean distance of earth to the moon?. is the moon

Astronomy Review - . what is this phase of the moon?. a. third or last quarter moon b. waxing crescent moon c. first

Astronomy Test Review - . astronomy 1 - 10. which of the following best describes our solar system? earth is at the

FINAL REVIEW: ASTRONOMY - . *base your answers to questions 5-7 the diagram below which shows the position of earth and

REVIEW SESSION - . or the whole of psychology in under 90 minutes. higher level cognition. availability

Review Session - . saturday, 3 pm ph 104. figure 25-17 problems in the oxidation of unsaturated fatty acids and their

Review session - . in this lecture we will review the major models that we have developed in the course. this course has