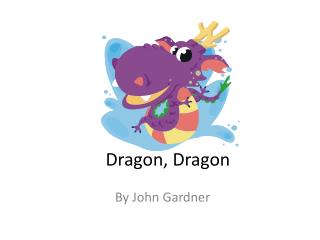 Dragon, Dragon. By John Gardner. There was once a king whose kingdom was terrorized by a dragon . The dragon was a prankster and liked to drive everybody crazy, he would do crazy things like:. Stopped up chimneys . Frightened maids Broke store windows. Set people clocks backs Dragon, Dragon - . by john gardner. dragon, dragon. setting the story takes place in a kingdom far away, but in modern

Dragon, Dragon - . problem. a kingdom is upset by a dragon. this is not unusual. what is unusual is that the dragon

Dragon, Dragon - . by john gardner. setting up the vocabulary section in your reading journal. selection vocabulary +

dragon - . by lea mokwuah 3p. dragons pearl. dragon but his pearl was holding him back. dragon well tea. the tea helped

Dragon City-Dragon City Hack - Dragon city has come to life on facebook, iphones and android apps all over the

Dragon Rider - . by adam. the setting. there is no real setting. the characters travel all around the world. they went to

JOURNAL: DRAGON - . 1. what do dragons look like? are dragons good or bad? what kind of stories have dragons in them? 2.

Dragon Club - . interactive. enter. welcome. hope you enjoy the use of this product but there is one rule, never click

DRAGON BALL - . dragon ball. dragon ball is an anime series of japan , the first chapters were made in the year 1986, it

DRAGON HUNT - . the greatest fps ever made… during this period. dragon hunt. dragon hunt has two backgrounds it has

The Dragon - . i am the only creature , that can do, what i can do. i breath fire , my skin is toxic , my tail is leaking