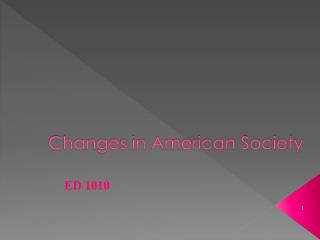 Changes in American Society. ED 1010. Self Assessment . 1. In the U.S. the least likely family pattern is a) a single-parent family. b) a blended family with children from previous marriages. c) children living with grandparents or other relatives. The War Changes American Society - . please open your textbooks and turn to page 147. the united states created a new

Changes in Medieval Society - . section 14.2. a growing food supply. changes in agriculture what was one of the changes

Changes in medieval society - . the middle ages in europe, part vi. which kingdoms fought each other in the hundred

Changes in Medieval Society - . 14/2. setting the stage. while church reform, cathedral building, and the crusades were

Changes in medieval society - . 14.2. main idea and why it matters now. mi: the feudal system declined as agriculture,