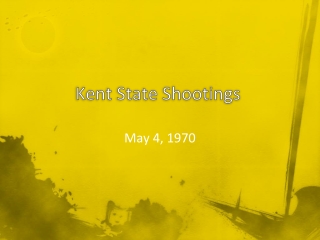 Kent State Shootings. May 4, 1970. OHIO by Crosby, Stills, Nash and Young. Tin soldiers and Nixon's comin '. We're finally on our own. This summer I hear the drummin ‘ Four dead in Ohio. Gotta get down to it. Soldiers are gunning us down. Should have been done long ago. Kent State - . a tragic thirteen seconds on a sunny day in may. the two perspectives of the kent state shootings:. it was

Kent State Massacre - . carey wood. why?. protests have been occurring across america after richard nixon announced his

Kent State Riots - Background . protests of the vietnam war were spreading all over the united states. these protests

Kent State Massacre. - Kent state massacre. may 4, 1970. the shootings. four students two of them women were shot to

Kent State Massacre - . the anti-war protests of the counterculture through out the week leading up to may 4 th , 1970

The Kent State Riots - . historical background of kent state riots. what was the kent state

Blackstone LaunchPad Kent State - . october 16 th , 2013. what is launchpad?. launchpad continued. all types of ideas for