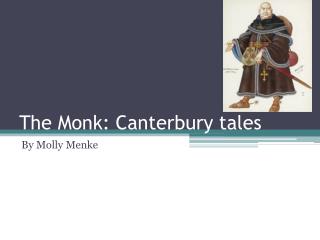 The Monk: Canterbury tales. By Molly Menke. Summary. There is a monk. It is said that hunting is his finest sport, even though it is said that hunters are not holy men. He tended to ignore the rules of St. Benedict and St. Maurice. He preferred the spacious world of the cloistered monastery. Chapter 5 - . heredity. gregor mendel. the father of genetics and heredity famous for his pea experiments was a monk in a

3 rd Marking Period Quarterly - . name the austrian monk who is known as the father of genetics!. thomas hunt gregor

Unit 3 - . genetics. gregor mendel. austrian monk 1800’s observed some traits disappeared in one generation, only to

Pilgrim’s Pride - . nights that begin with k. millers &amp; reeves. pardon me!. about the chaucer. the canterbury

The Spiritual Disciplines Door to Liberation - . i go through life as a transient on his way to eternity, made in the

Canterbury Tales - . the company assembles: art as experiment. the general prologue and the “fragments”. list of