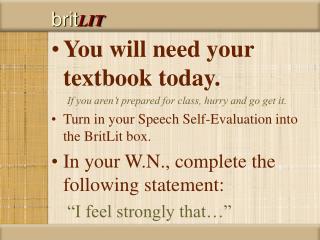 brit LIT. You will need your textbook today. If you aren’t prepared for class, hurry and go get it. Turn in your Speech Self-Evaluation into the BritLit box. In your W.N., complete the following statement: “I feel strongly that…”. Values Continuum. Strongly Agree. Strongly Disagree. Brit Lit Wit - . by regina robinson. literary terms 200. the repetition of consonant sounds at the beginning of words is

April 8, 2014 Brit lit - Reminders! 1.because of senior recognition day on friday, we will have the vocab 8 quiz on

BRIT Awards - Highlights from the brit music awards in

Brit Awards 2019 - Highlights from the brit awards in

Intro to Brit. Lit.Survey - . just a quick overview of what is to come…. “england”. groupings of the lit. early