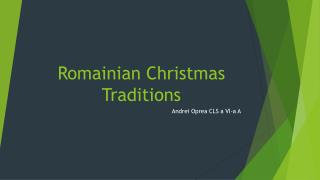 Top Things to Do in Romania - Romania held uncountable places to visit that can bring pleasure in your trip. not only it

Christmas in Romania - Christmas or christmas day is an annual holiday commemorating the birth of jesus christ,

hristmas raditions - . how does your family celebrate christmas?. christmas is a holiday that is enjoyed all around the

Christmas in Romania - . december. how we prepare our souls?. christmas is a very important celebration for the romanian

EASTER TRADITIONS - . by ioniceanu alexandra. easter traditions in romania. easter is the most important celebration of

DISCOVER ROMANIA - . geography. with a surface area of 238,391  square kilometers romania is the largest country in

The Romanian traditional foods and drinks - . made by jinga dragos.

Holidays Around the World - . christmas. santa

Traditional food for Christmas In Romania