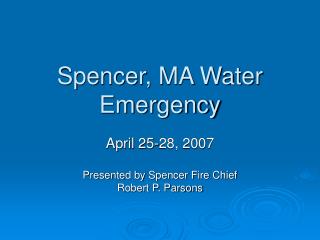 Emergency Drinking water - . bruce macler usepa. what do folks use water for?. drinking and cooking sanitation and

WATER EMERGENCY DEMONSTRATION - . presented by the collection management group of the rutgers university libraries. this

Emergency Water Damage - We have state of the art tools, equipment and processes for water damage cleanup so that we can

Spencer - . i am the best at working. my favorite subject in school is health. i like to read books that are funny. my

How to Store Water for Emergency in Emergency Water Storage Tank? - Check out the powerpoint presentation to know how to

Diana Spencer - . author: ola piegat 1c. she was born at park house,. sandringham in norfolk, england on 1 july 1961 at