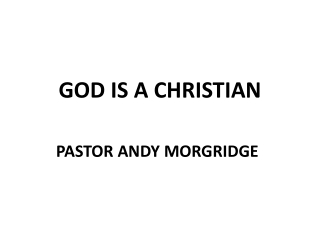 GOD IS A CHRISTIAN. PASTOR ANDY MORGRIDGE. On June 20, 2015 Mike Awoyinfa in his Sat. Sun Newspaper column, PRESS CLIPS, wrote an article titled, GOD IS NOT A CHRISTIAN. It was a commentary on the book by DESMOND TUTU. Christian Youth Camp - God Is My Father - Children will explore fatherly qualities in god. the goal is to help children

WHAT IS A CHRISTIAN? - . by definition, the word “christian” means “a follower of christ”. by concept, a follower

WHAT IS A CHRISTIAN? - . there are at least three major religions in the world today: jewish, moslem and christian the

What Is A Christian? - . what does it mean to be a christian?. “by way of reminder”. reminders are important. the

What is a Christian? - . and how does one become a christian?. if we can find a scriptural answer to the first question,

What Is a Christian? - . christian. webster’s new world

A Christian is one who is… - . zealous. what does it mean to be zealous?. thayer definition: 1) excitement of mind,

There Is A God - . b.a.s.i.c. training. exploring essential doctrines an “essential” doctrine is one without which

Is there a God? - . why don’t people believe in god?. it can’t be empirically proven that he exists. science gives us

Is There a God? - . a scientist’s view. objective observation. earth is round. reason and logic. a god with the

Is There a God? - . the atheist’s answer. there is no god. atheists reject the idea of a supreme being, preferring to

Is God a capitalist? - . framing the question: what is