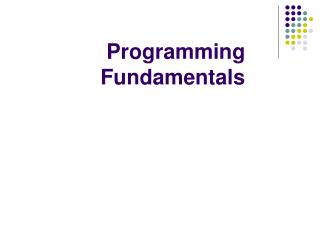 Programming Fundamentals. The setw Manipulator. setw changes the field width of output. The setw manipulator causes the number (or string) that follows it in the stream to be printed within a field n characters wide, where n is the argument to setw(n).

Computer Science 111 Fundamentals of Computer Programming I - . working with our own classes. so much for learning

HELLO! - . my name is mohammed tanash i am here because i am going to present at the aci-r ef . you can contact me at