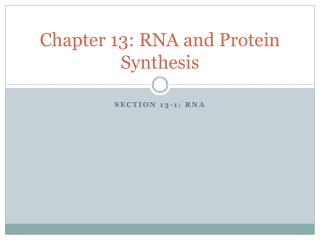 Chapter 13: RNA and Protein Synthesis. Section 13-1: RNA. The Role of RNA. The sequence of bases in DNA carries a code – but what does it mean? DNA contains instructions telling the cell how to make proteins Chapter 4 Alkanes: Nomenclature, Conformational Analysis, and an Introduction to Synthesis - . shapes of alkanes

Synthesis of Alum Lab - . this synthesis reaction involves a redox reaction and the formation of a complex ion. balanced

Chapter 17 - From Gene to Protein - . now that we know how the genetic design information that codes for all the

Chapter 4 Alkanes: Nomenclature, Conformational Analysis, and an Introduction to Synthesis - . shapes of alkanes