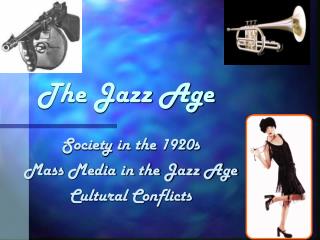 The Jazz Age. Society in the 1920s Mass Media in the Jazz Age Cultural Conflicts. The Jazz Age. The 1920s were a time of rapid social change in which many people – particularly women – adopted new lifestyles and attitudes. Setting the Stage. 1880s: Industrialization and immigration.

Jazz and Blues Music - . in the beginning and today. what is jazz?. jazz is free!. in jazz music the structure is less

The Jazz Age - . by emily, olivia, maya, whitney and lane. when did the jazz age start, and how long did it last?. jazz

Overview of Jazz - . task 1. complete the first two columns of the kwl organizer for the topic of jazz (what i know and

Jazz - . america’s musical gift to the world. bell ringer #1. name three cities that jazz music was popular in, during

Jazz Age By: Janice - Jazz age and the great gatsby by: janice ribet. jazz age by: janice. group of women / photo by