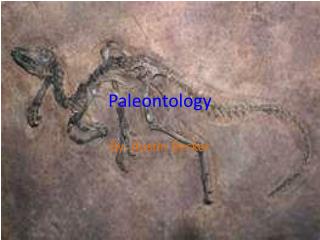 How (and How Not) to Survey a Systematic Invertebrate Paleontology Collection for Locality Data - . paul mayer

Paleontology Studying The Fossil Record - . phylogeny. the evolutionary history of a species or a group of species over

Fossils - . unit 4. what are fossils?. fossils are the petrified remains of ancient objects. petrified – means turned

Earth’s Story and Those Who First Listened - . chapter 6 section 1. paleontology- the study of past life using fossils.

Paleontology Test Review - . what is a paleontologist?. a person who studies past life (fossils). how do scientists date

Chapter 3 What the rocks say: how geology and paleontology reveal the history of life - . assigned reading. assigned

Paleontology Study of prehistoric life - . fossils preserved remains or traces of organisms; evidence of past life.

Stable isotopes in paleontology and paloclimatology - . back to basics. parts of an atom electrons, protons, neutrons