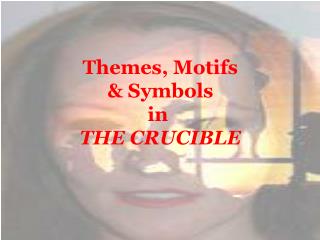 Themes, Motifs & Symbols in THE CRUCIBLE. Themes Themes are the fundamental and often universal ideas explored in a literary work. Intolerance The Crucible is set in a theocratic society, in which the church and the state are Catcher in the Rye - . by j. d. salinger. overview. the plot the characters the themes the motifs the symbols the author.

Themes, Motifs and Symbols - . themes. the central idea or underlying meaning of a literary work typically deals with an

The Scarlet Letter - . themes and symbols. themes: the scarlet letter. literary themes are the insight an author presents

The Crucible - . the crucible by arthur miller background info before you read. communism… . an

Tuesdays with Morrie - . motifs, symbols and themes ms. pastwa: 9 th college. motif. a motif is a detail in a story that

Themes, Imagery, and Symbols - . in fahrenheit 451. theme. an observation of life which serves as the controlling idea

Truth, authority, language - . exploring themes in the crucible. thesis. the crucible reaffirms the notion that the world

Literary Terms, Themes and Motifs - . alliteration. the repetition of one or more beginning sounds, usually consonants,

Theme, Symbols, and Motifs - . theme…what is it?. themes can be found everywhere: literature, art, stories, movies,