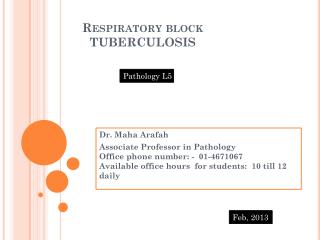 TB, Lung Abscess, and Cystic Fibrosis - . tb. radiographic findings in primary tb are nonspecific tends to like the lower

PULMONARY INFECTIONS - . prof.dr.ferda Özkan. normal lung. the lungs are constructed to carry out their cardinal

INTRODUCTION TO RESPIRATORY BLOCK - . modes of teaching. teaching of this block contents will be in the form of :

RESPIRATORY BLOCK Practical - . 2014. streptococcus pyogenes = group a strep. carried by 10-25% of many in throat often