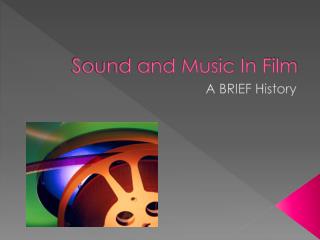 Sound and Music In Film

Sound and Music In Film. A BRIEF History.

Sound and Music In Film

Role of Music and Sound Effects in Gaming - Sound effects have an incredible influence on the overall game experience.

Editing and Sound - . chapters 3 and 4. a scene is a section of narrative that gives the impression of continuous action

The Use of Music as Emotion in Film - . cheryl bates, d.m.a. lone star college-tomball, professor of music music program

Sound Design, Music, and Recording - . cs 5964. no one will listen to a bad recording, no matter how pretty the pictures.

Introduction to MUSIC “Music is one form of sound, but not all sounds are music.” - . musical structure. sound tone

Music For Film Function of Film Music - . the 5 functions of film music. source music (diegetic music). sense of time or

Film Music - . what are we going to learn?. learn about different film composers. learn how to compose different types of

Analyzing Sound in Film - . sound effects. how movie sound effects are made . listen to this scene from a movie without