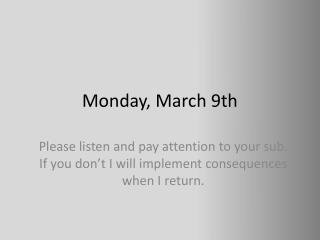 March 9th - . reading and science. math. we will be working with the rhombus, trapezoid, triangle, and square pattern

Monday March , 2013 - . aim: how does the forensic examination of paint give insight to solving a crime scene? do

Monday March 28 - . india greetings: the namaste is india's traditional greeting. one presses the palms together (fingers

Monday March , 2013 - . aim: how does the forensic examination of paint give insight to solving a crime scene? do now:

Monday , March 5th - . word association : i will give you a word and you will have 1 minute to write down as many words

Monday, March 24th - . get your things from the cabinet and take out your homework. create a vocabulary square for the

Monday , March 5 - . 1. put your monroe doctrine worksheet on my desk (we will grade it tomorrow) 2. update your spiral

Monday, March 8th - . bell ringer: are these two expressions equal? show why or why not. expression a. expression b.