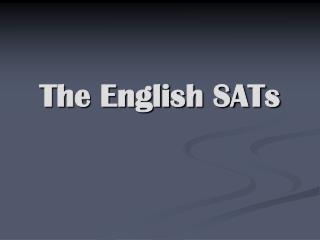 The English SATs. Who and what do they test?. The tests assess students working on Levels 3 to 7. The tests are used to measure progress at KS3 and set targets for KS4.

Welcome - . sats timetable. english. the tests in english are: grammar and punctuation test – marks out of 50 spelling

Question - What are A, B, C and D? - Genetics and breeding l.o. 1) know the meaning of all the keys terms introduced

2014 SATs - . what are sats tests?. sats (statutory assessment tests) is the name used to refer to the end of key stage

Models of writing - . week 0 pgce. objectives. to consider the purpose and function of writing. to review models of