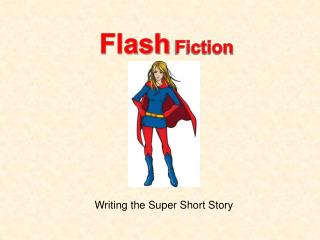 Flash Fiction - . writing in a flash!. 5 elements of powerful flash fiction. flash fiction contains most of the following

Babe &amp; ME BY: Dan Gutman FICTION 2000 - . alec escalona. setting. it start in present time , but it mostly take

Short, Short Fiction… - . …written and in the form of video. short, short, fiction. there is a genre of short story

Micro-Fiction Mini Unit - . journal 4/29. hyphens are used to create compound adjectives. when the adjectives in question

Speculative fiction - . entertaining audiences from cavemen to comicon english 6 ms. levy. what is genre?. from

Micro Fiction! - . like regular fiction, but micro. what is micro fiction?. a style of fictional writing of extreme

Flash Fiction - . warm-up: what do you know about flash fiction? write everything that comes to mind when you hear the