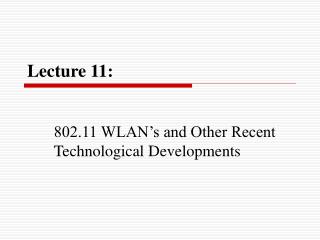 Lecture 11:. 802.11 WLAN’s and Other Recent Technological Developments. This lecture provides discussion of the latest technological advances in the following areas. Wireless Local Area Networks based on the IEEE 802.11 family of standards IEEE 802.16 and 802.20