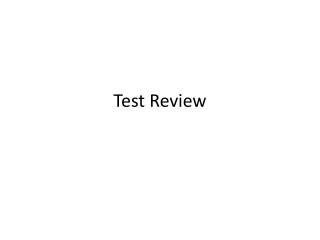 Test Review. 1. In “Speech in the Virginia Convention,” Patrick Henry says, surprisingly, that he must take a certain action against England in order to be a true patriot. What is this action? a. support England's actions b. speak out against England c. become an officer in the army Test Review - . brsm, trifles, the lottery. brsm. know the vocabulary who are the two main characters in this story? what

Test Review - . question #1 what determines the pitch of a note – its amplitude, frequency, or wavelength? do not show

Test Review - . ancient greece and rome. the test will be on wednesday, october 19. one way to effectively use this study

Test Review - Test on friday oct. 8. test review. two liquids are poured together. is this a physical or chemical change

Test Review - . copy everything into your notes!! if you made a 100, you may read a book until we finish!. matter….

Test Review - . agenda – feb 22 nd and 23 rd. combine and share smart notebook pictures (everyone save where you can

Test Review - . test 2 – thursday. review material. what is matter? what are the units for length, mass, volume? define

Test Review - . chapters 7-10. what was hamilton’s economic plan?. he wanted to tax domestic goods and add tariffs to