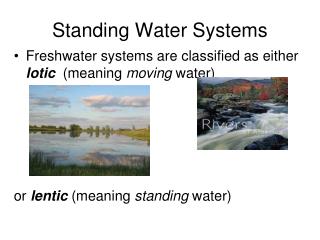 Standing Water Systems. Freshwater systems are classified as either lotic ( meaning moving water) or lentic (meaning standing water ). One type of lentic system is a Wetland. An area of land that is covered with a shallow layer of water during some or all of the year. 8 Tips for Preventing Water Damage - If you are dealing with any kind of water damage, then donâ€™t wait to call all

Green Mountain Water Association Legislative Lunch February 26, 2014 - . who is gmwea?. established in 1994 by merger of

Freshwater Systems - . less than 1% of the water on earth is available for us as freshwater freshwater exists as surface

Limnology! - . limnology. “the oceanography of lakes” study of the functional relationships and productivity of