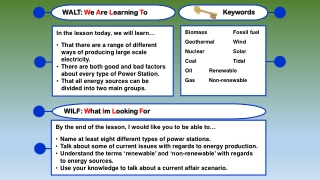 Keywords. WALT: W e A re L earning T o. In the lesson today, we will learn… That there are a range of different ways of producing large scale electricity. There are both good and bad factors about every type of Power Station. That all energy sources can be divided into two main groups. W hat A re we L earning T oday? - . to learn about famous pirates to think about life in the past to write a report based