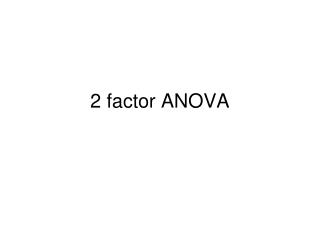 Two-Way ANOVA - . blocking is used to keep extraneous factors from masking the effects of the treatments you are

ANOVA: Analysis of Variance - . 1-way anova. anova. what is analysis of variance the f -ratio used for testing

One Way ANOVA - . one way anova’s involve a single independent variable. logic for anova. the logic for an f-test

ANOVA Randomized Block Models 2-Factor Without Replication - . reducing variability. remember -- we are more sure of our

One way-ANOVA - . analysis of variance. let’s say we conduct this experiment: effects of alcohol on memory. basic

Two-Way Analysis of Variance - . 2-factor anova. previously… . we learned how to conduct a one-way anova, one-way

Factor Analysis: - . a brief synopsis of factor analytic methods with an emphasis on nonmathematical aspects. factor