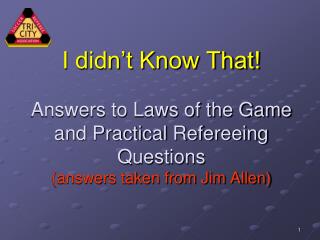 Proactive Refereeing - . introduction. good referees are students of the game they can ‘feel’ what’s coming next

Some Practical Questions - . 1. is there such a thing called complete specialization?. some practical questions. 2. is

Histology Practice Practical Questions - . to quiz yourself, make sure that you select “slide show” in the menu bar

CCDE Practical Exam Questions - “an investment in knowledge pays the best interest.” if you are looking for the ccde

Refereeing is Thinking - . why are we here?. to learn practical techniques… to manage the older players’ game… for

Empowerment Some Practical Questions Answers - What's in this for me?. appropriate employee empowerment is essential to

Refereeing The Ruck AARQ - QSRR - . refereeing the ruck agenda. importance to the game the gate the ruck communication