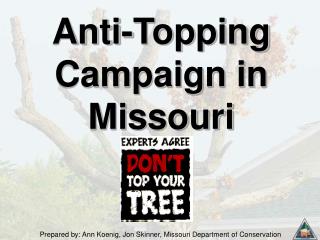 Anti-Topping Campaign in Missouri. What is topping?. Topping is the indiscriminate cutting back of tree branches to stubs or lateral branches that are not large enough to assume the terminal role. Other names for topping include "heading," "tipping," "hat-racking," and "rounding over.". ANTI SMOKING CAMPAIGN - . the students of jss international school spread the awareness of ill effects of smoking and

Topping - . why does a plant have leaves?. as a store for seed production. historical perspective. late topping/ full

Micro Topping - Flash concrete is your premium installer of all things associated with micro topping. we have a huge

Pizza Topping - Are you looking for hand crafted pizza topping at a reasonable price? sonoma farm is the best choice of

ANTI-CORRUPTION CAMPAIGN IN NIGERIA (1999-2007) - . the politics of a failed reform david u. enweremadu. presentation

Anti-HIV/AIDS Campaign in Addis Ababa - . hiv/aids situation the response to the epidemic achievements challenges the way

“The Perfect Topping” - . sincere thanks to ramon and the awesome crew who made the completion of clubhouse by adding

Topping &amp; tailing - . epq . the topping . what is the difference between the abstract &amp; the