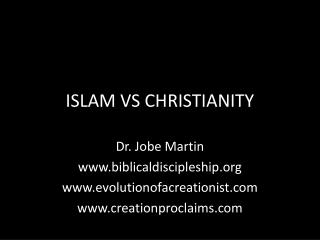 ISLAM VS CHRISTIANITY. Dr. Jobe Martin www.biblicaldiscipleship.org www.evolutionofacreationist.com www.creationproclaims.com . A BIT OF HISTORY OF ISLAM. Muhammed [M] was born in Saudi Arabia in 570 A.D. M’s father died before he was born. M’s mother died when he was 6 years old. Islam &amp; Christianity - . muhammad. dictation of the koran … that lasted 20 years. the kabba in mecca. the

Christianity and Islam - . rise of christianity. some jews began to revolt against roman rule, resulting in all jews

Christianity and Islam - . question for thought…. what are some things that most religions have in common? what are

Islam and Christianity - . is allah the same as yahweh?. brief history. mohammad was born in 570 ad. at the age of 25, he

Islam to Christianity - The challenge of. islam to christianity. classical islam: power and authority islam itself means

JUDAISM, CHRISTIANITY, AND ISLAM - . judaism. hebrew is the sacred language god is called adonai synagogue is the holy

Exploring Islam and Christianity - . hijacking. a