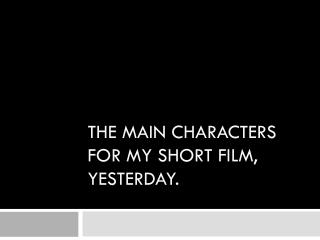 The main characters for my short film, Yesterday. The main characters for my short film, Yesterday. ABOUT.

The main characters for my short film, Yesterday.

Evaluation - . by s ophie aldridge. short overview of my

The Gruffalo - . by moya lee. about the book. author: julia donaldson. illustrator: axel scheffler. the gruffalo was

My Story - . by. objectives. for delegates to: understand the context of ‘all about me’ and ‘my story’ within the

Horror movie poster research - . what is a movie poster?. ‘ a film poster is a poster used to advertise a film. studios

The Story of an Hour - . kate chopin analysis. we are learning to: revise and analyse story of an hour. homework

A Retrieved Reformation - . by o. henry. before reading: connect to your life. in your lnb , make a list of characters in

The Lottery Shirley Jackson - . the author born in san francisco in

Character Log - . murder on the orient express. learning target:. analyzing character through their actions, words, and

Today’s Goals: - . i will recall the three types of characters . i will compare and contrast motives and traits . i

Assalamualaikum! This is a short story with fictional characters … - . … but based on the qur’an and authentic