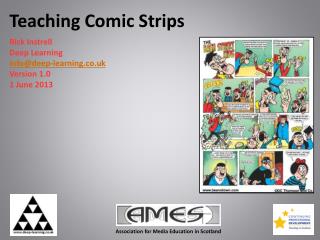 Features of comic strips - . panels. each picture is called a “panel”. the comic above has four panels. close-up.

Comic Books - Comic books are most popular and common for all. comics verse is best online platform to discuss about

Comic Strip - . “fight with grendel”. project. beowulf is divided into three main parts where beowulf has to face a

Integrating Curriculum and Comic Strips - . presented by greg herzig august 4, 2010. why use comic strips in your

Christ Comic - Click for cartooning sheet. christ comic. you are to create a comic strip version of the christ story. you

Vocabulary Comic Strips - . mrs. joines - vocabulary enrichment. you can give examples of the word in use. malaprop – a

Bitstrips – Comic Strips - . you will need to finish on your own time! i am not sure when we will get to go to the

Comic Books! - . by: mrs. harker. comic book readers “the smart kids”. why are “comic book nerds” so smart? could