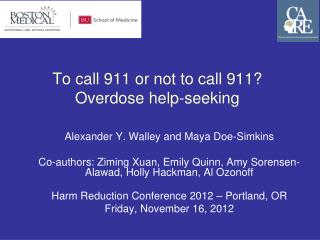 OVERDOSE: THE BAND - . mr. rr, 36yo male. brought in by ems/cps found in appt building foyer asleep with friend who

Webinar Instructions - . you will need to call the conference call number to hear the webinar audio . this is a long

Call Operators Are Standing By!!! - . call and --- ask for a copy of this presentation. in print or by pc data disk. ask

Welcome to: “If You Call Them, They Will Meet.” - . a workshop on lead follow up. your perception of leads the goal

Teleseminar Profits – PLR - Tele-seminars are actually conference calls. the way it works is one person will determine