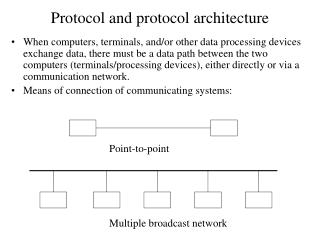 Protocol and protocol architecture. When computers, terminals, and/or other data processing devices exchange data, there must be a data path between the two computers (terminals/processing devices), either directly or via a communication network. Means of connection of communicating systems:. Internet Protocol Architecture - . chapter 2. the internet. internet evolved from arpanet developed in 1969 by the