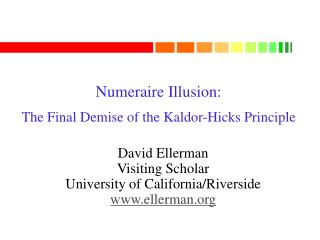 Numeraire Illusion: The Final Demise of the Kaldor-Hicks Principle Numeraire Illusion: The Final Demise of the Kaldor-Hicks Principle. David Ellerman Visiting Scholar University of California/Riverside www.ellerman.org. A “Proof” that inflation is impossible! . What’s wrong with this “argument”? How much would a dollar buy in 1900?

Numeraire Illusion: The Final Demise of the Kaldor-Hicks Principle

Final 403(b) Regulations - . focus on impact for k-12 schools. overview of presentation. provide summary of relevant