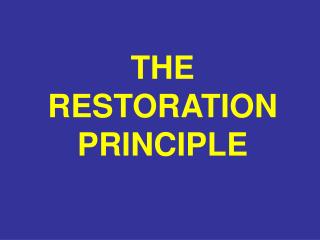 THE RESTORATION PRINCIPLE. The principle of the “restoration of the ancient order of things” is under vicious attack. One writer described some of the early Restoration views in America as “. . . . a frontier illusion, naïve in today’s religious climate” Department of Prosthodontics TSMU - . replacement of defects of teeth and dentition by cast and metal-ceramics

The Restoration of the Tabernacle of David - . online resources. www.threemacs.org. perspectives. course

Section 11.1 The Fundamental Counting Principle - . objective 1. use the fundamental counting principle to determine the