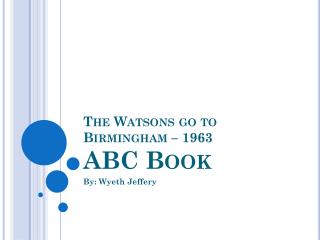 Birmingham Airport car parking - Park your car safely with us in the best spots near birmingham airport. we can help you Birmingham man and van - Move swift of uk is a moving company which is located in birmingham but work for whole uk. they

The Watsons go to Birmingham – 1963 ABC Book - . by: wyeth jeffery. a. a is for alabama, because the watsons go to The Watsons Go To Birmingham - 1963 by Christopher Paul Curtis*

The Watson’s Go to Birmingham-1963 - . book by: christopher paul curtis presentation by: mj.

And You Wonder Why We Get Called the Weird Watsons - . from the watsons go to birmingham. choose one of the following and

Notes on Dr. Martin Luther King, Jr., “Letter from Birmingham Jail” (1963) - . some preliminary questions. what was

Jesus as Healer - . what do the scriptures teach about healing?. five important facts about healing from dr. luke. first

TELPAS Alternate Listening Domain - . purpose of this telpas alternate training. intended for classroom teachers who will