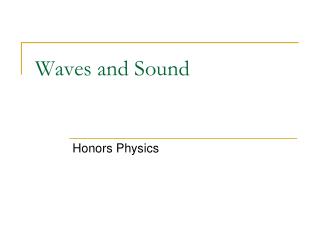 Waves and Sound. Honors Physics. What is a wave. A WAVE is a vibration or disturbance in space. A MEDIUM is the substance that all SOUND WAVES travel through and need to have in order to move. . Two types of Waves. The first type of wave is called Longitudinal .