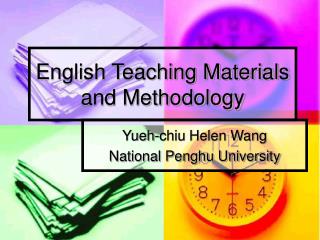 English Teaching Materials and Methodology. Yueh-chiu Helen Wang National Penghu University. ESL vs. EFL. ESL refers to English as a Second Language taught in countries (such as the United States, the United Kingdom, or India) where English is a major language of commerce and education). .

Teaching L2 Learners How to Listen Does Make a Difference: An Empirical Study - Researcher: larry vandergrift

Why : The Children Are Watching. - What : incorporate ritchhart’s theory of modeling (chapter 5) to our work dedicated