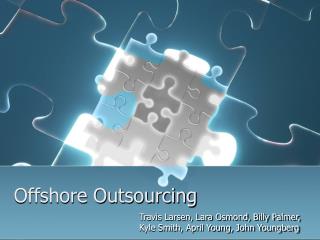 Offshore Outsourcing. Travis Larsen, Lara Osmond, Billy Palmer, Kyle Smith, April Young, John Youngberg . Background: Offshoring and Outsourcing. These terms have had various meanings and are used interchangeably in some of the literature, to clarify: OFFSHORE OUTSOURCING: Is this Un-Australian or is it 21st Century Pragmatism | Maryann Farrugia - The slide is created by

offshore development - Outsourcing is an india based it services company focusing on software development, it consulting