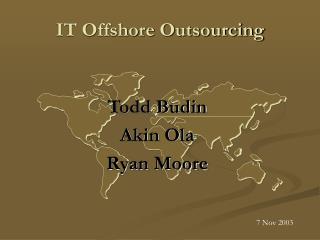 OFFSHORE OUTSOURCING OF IT-ACTIVITIES - . carla kiburg union official it-sector the netherlands. who am i?. union

Making it Big: Offshore Outsourcing for SMEs - Today, large corporations face a cutthroat competition when it comes to

Definition of Offshore Outsourcing - . offshore outsourcing is the management and/or day-to-day execution of a project,

Offshore Medical Outsourcing Companies - Since many years, we have been proving ourselves as one of the best offshore