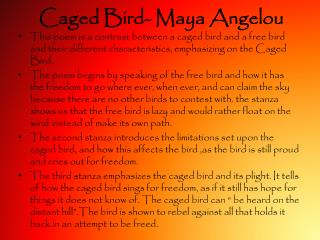 Caged Bird- Maya Angelou. This poem is a contrast between a caged bird and a free bird and their different characteristics, emphasizing on the Caged Bird.

Avian adventures - Photographers around the world have been documenting birds during this busy time of year migrating,

Seabirds mired in mystery goop - A bird is cleaned at the international bird rescue in fairfield,

On the TV were some funny bells - . …that sounded like a bird chirping. that silly bird was using a comb on its

Selective Breeding - . to understand what selective breeding is, and how this is useful. tuesday, may 22, 2012. super

I KNOW WHY THE CAGED BIRD SINGS - . the power of expression in the african-american experience. day 1 day 2 day 3 day 4

I Know Why the Caged Bird Sings - . vocabulary. correct in every way adjective. accurate. assured. made certain something

Maya Angelou Group Project - . by: zj martin and rk martin. who was maya

Maya Angelou - . facts about maya angelou. maya angelou was born in st. louis, missouri on april 4 th 1928. she was