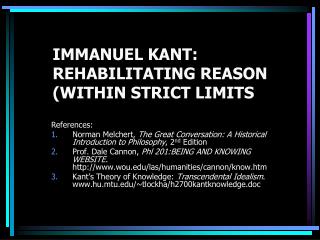 Rationalism - . rationalism, empiricism, and kant rationalism: the idea that human beings achieve knowledge because of

1.2 Finding Limits Graphically &amp; Numerically - . after this lesson, you should be able to:. estimate a limit

Immanuel Kant - . immanuel kant, the last of the modern philosophers, was born and educated in

Immanuel Kant - . grounding for the metaphysics of morals. “nothing in the world can possibly be conceived in the world