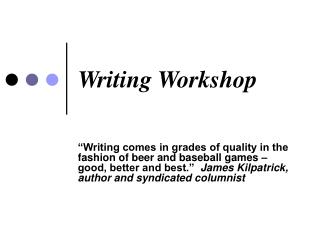 Writing Workshop for parents Tuesday November 2013 - . the 'four candles' sketch. ‘the writer is an explorer. every

Reading/Writing Workshop Mini-Lesson - . architecture of a mini-lesson. focus the purpose of lesson. teacher is on-stage.

Al-Anon Writing Workshop - . or “how to let go of the fear of writing for publication” brought to you by: the

WRITING WORKSHOP - . by: ms. m. menendez edited and expanded by: mrs. a. guerra. “here’s the secret to writing: there