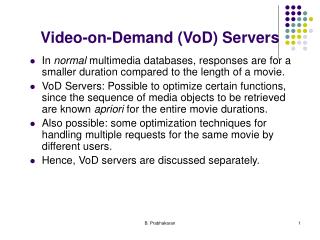 Video-on-Demand (VoD) Servers. In normal multimedia databases, responses are for a smaller duration compared to the length of a movie. VoD Servers: Possible to optimize certain functions, since the sequence of media objects to be retrieved are known apriori for the entire movie durations.

How Covid-19 is impacting On the Video on Demand (VoD) Industry? - Video on demand (vod) is an interactive tv technology

Video On Demand Market Trends And Its Development - Video on demand (vod) is a system that permits users to select,