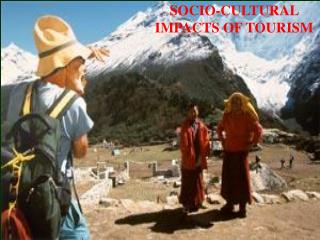 Social and Cultural Environment and The Tourism Industry - . overview. definition of culture and society. demographic and

Impacts of tourism in Kenya - . lo: to be able to explain the positive and negative economic/ social and environmental

The effects of the growth of tourism - . lo: to be able to explain the positive and negative impacts of tourism to

An introduction to tourism and its impacts - . the world is a book, he who stays at home reads only one page. historical

SOCIO-CULTURAL INTEGRATION - . 1. examine the role of diasporas in preserving culture and the adoption of minority traits

How the process is significant for people: Economic Impacts of Tourism - . economic impact of tourism. the tourism

Economic impacts of tourism on indigenous enterprises in Namibia - . julia j änis 26.4.2011. contents of the