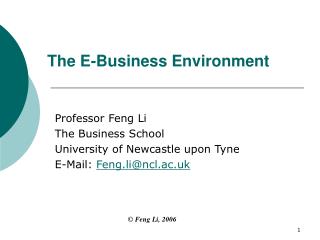 Business Sustainability “Greening the Corporation” - . will o’brien december 2009. &quot;what we take for

LO3 - Know the impact of the economic environment on businesses - Unit 29. the business environment. lo3 - know the

Automate Your Business Plan - . a comprehensive business planning tool that provides solutions for business. how to

Small Business Edition 4 - . c707 – technical overview. prerequisites. prior to taking this training you should be able

OBE 118 - LEGAL ENVIRONMENT OF BUSINESS Dispute Resolution - . prefatory thoughts you are discussing with your attorney