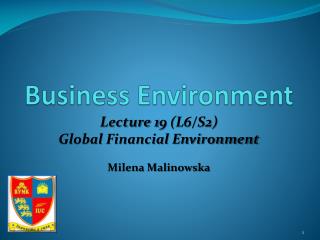 Business Environment. Lecture 1 9 ( L6/S2) Global Financial Environment Milena Malinowska. Definitions. The balance of payments is a form of state book keeping, where monetary inflows and outflows are recorded The number of transaction depends heavily on the exchange rate

WE MUST PROTECT OUR ENVIRONMENT - . our country. our environment. there are many big and small rivers, green for­ests,

Business Research Review 1 - . introduction. to be a responsible individual, he/she has to understand the environment and

Economic Environment of business - . lectures 3 and 4 oligopoly and game theory. market structures. i. conditions for

The Legal and Ethical Environment of Business - . chapter 6 contracts. learning objectives. find out when the uniform

The Evolution of American Government Implications for Business and Industry - . frank r. baumgartner professor and head