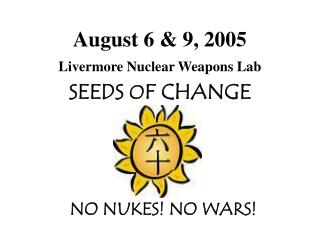 August 6 & 9, 2005 Livermore Nuclear Weapons Lab SEEDS O F CHANGE NO NUKES! NO WARS! WHY DEMAND NUCLEAR ABOLITION NOW? In the midst of the ongoing slaughter in Iraq, why focus on a call for nuclear abolition?

Development of NECSA The Research Era - . 1959 the atomic energy board (aeb) is instituted as an autonomous research

Closing the Achievement Gap NO EXCUSES - . patricia w. davenport. beliefs. children of all races and income levels can