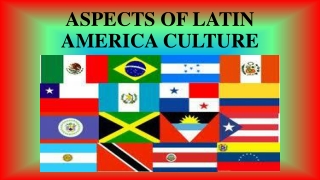 ASPECTS OF LATIN AMERICA CULTURE. LANGUAGE. The most widely spoken language in Latin America is Spanish. However, Portuguese is spoken in Brazil. English, and French are also spoken in some smaller countries. ETHNICITY.

Latin America: Culture - . unit 5 lesson 3. components of culture. on a piece of paper write down as many components of

Culture in Latin America - . unit 3. colonial roots. because of colonialism, the countries of latin america have similar

LATIN AMERICA HISTORY AND CULTURE - . chapters 10, 11, 12. mexico history and culture. what were the cultures of mexico

Unit 5 Culture of Latin America Study Guide - What impact has the size of cuba had on the country and its people? fewer

Aspects of Culture - . bell ringer: how is each of us a product of our culture? what beliefs and traditions are held by